EXTENDED IF IT WAS AN ANGEL BY LEONARDO… | SKYLINES, THE CITIES OF LEONARDO | ANGELS AND KNOTS 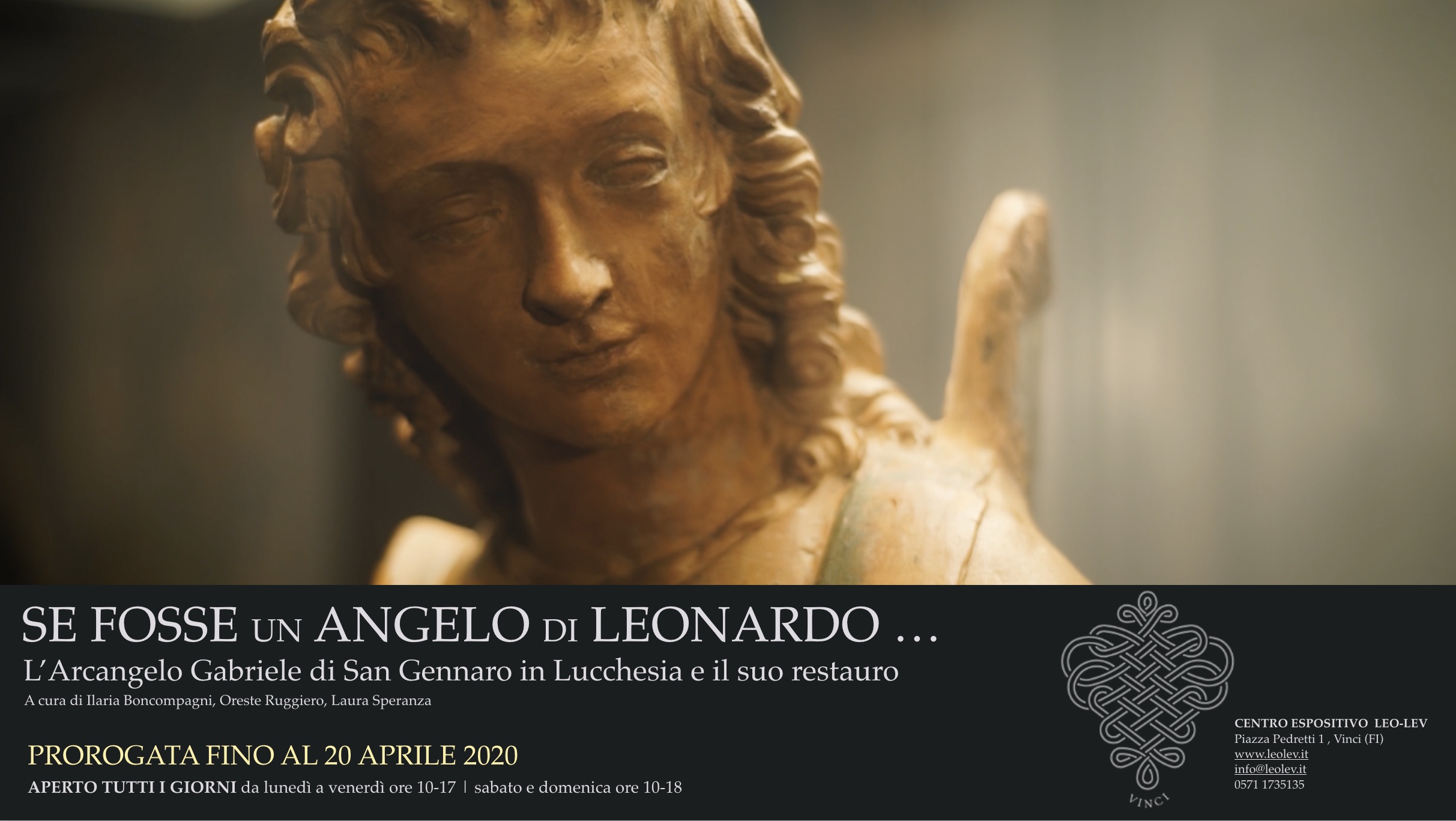 The Leo-Lev Exhibition Center responds to the enthusiasm of the public by announcing the extended of the exhibition If it was an Angel by Leonardo … The Archangel Gabriel of San Gennaro in Lucca area and his Restoration, and  of the side exhibitions Skylines – The Cities of Leonardo and Angels & Knots by Oreste Ruggiero.

In the short opening period (5 October 2019/2 February 2020) – which coincided with the autumn / winter period, low season for tourism in Tuscany – the exhibition was however very successful: thousands of visitors went to Vinci to admire the Announcing Angel of San Gennaro. Scholars and individuals – even from faraway places – who wanted to see and comment on the exhibited work.

The terracotta sculpture attributed by Carlo Ludovico Ragghianti to the Verrocchio school and by Carlo Pedretti to the young Leonardo da Vinci, is the largest of the sculptures ascribed to the Renaissance master. Executed at the end of the fifteenth century and located in the Pieve (Parish church) of San Gennaro in Capannori (Lucca province), the work suffered a serious damage in 1773 when, according to some documents, it broke into pieces after being hit by a staircase.

The restoration – financed by Leo-Lev and lasted less than a year – was carried out by the Opificio delle Pietre Dure. In addition, the Florentine Institute has also created a faithful replica of the terracotta angel, through the 3D scanning of the work and thanks to the analysis and recovery of the original pigments and to the use of the same pictorial technique, obtaining in this way a sculpture which replicates the work as if it had just come out of the hands of the artist who produced it.

The angel and his replica are on display on the first floor of the Leo-Lev complex, where visitors can take advantage of multimedia contributions dedicated to the statue, to its restoration, and to the creation of the copy. A special video illustrates the return journey of the angel from Vinci through the Valdinievole to the Romanesque parish church of San Gennaro, where it will be relocated in the near future.

If it was an Angel  by Leonardo … The Archangel Gabriel of San Gennaro in Lucca area and its restoration, promoted by MIBACT, Soprintendenza (Government Department) for Archaeology, Fine Arts, and Landscape) ABAP Lucca and Massa Carrara , Opificio delle Pietre Dure, Archdiocese of Lucca, and Leo-Lev,  by Ilaria Boncompagni (official of the Soprintendenza – Government Department -of  Archaeology, Fine Arts and Landscape of the Provinces of Lucca and Massa Carrara), Oreste Ruggiero (President of Leo-lev Artistic Activities) and Laura Speranza (Director of the Restoration Sector of Ceramic and Plastic Materials of the Opificio delle Pietre Dure). Catalog by Polistampa Edizioni, with the  introduction  by  Mikhail Piotrovsky, General Director of the State Hermitage Museum, St. Petersburg.

What is more, the Leo-Lev Exhibition Center  extends the side events  Skylines – The Cities of Leonardo and Angels & Knots.

Skylines-The Citis of  Leonardo is dedicated to the places that have accompanied the artist’s life path. The works by Oreste Ruggiero, reproduced on large wall panels, depict the urban panoramas of Vinci, Florence, Milan, Rome, and Amboise: five cities that represent as many stages in Leonardo’s human and artistic journey, from his birth and artistic training to the last years of life spent in France.

Angels & Knots, is an exhibition inspired by the famous Leonardo  knots. In fact, Oreste Ruggiero has artistically reinterpreted the Vincian knots and created a grid for portraits and effigies to enter into osmosis. It is an exclusive of his art that “veils” the faces depicted in a sort of intertwining that evokes the plant branching and, at the same time, the immaterial dimension of infinite space. In this way those knots enter into symbiosis also with the feelings, or motions of the soul as Leonardo used to call them, of the portrayed character.

Bu means of  this art, which intends to be a tribute to Leonardo, Ruggiero also paid homage to the splendid face of the Angel of San Gennaro before its restoration; when, however,  events and time passed had not  affected its beauty.