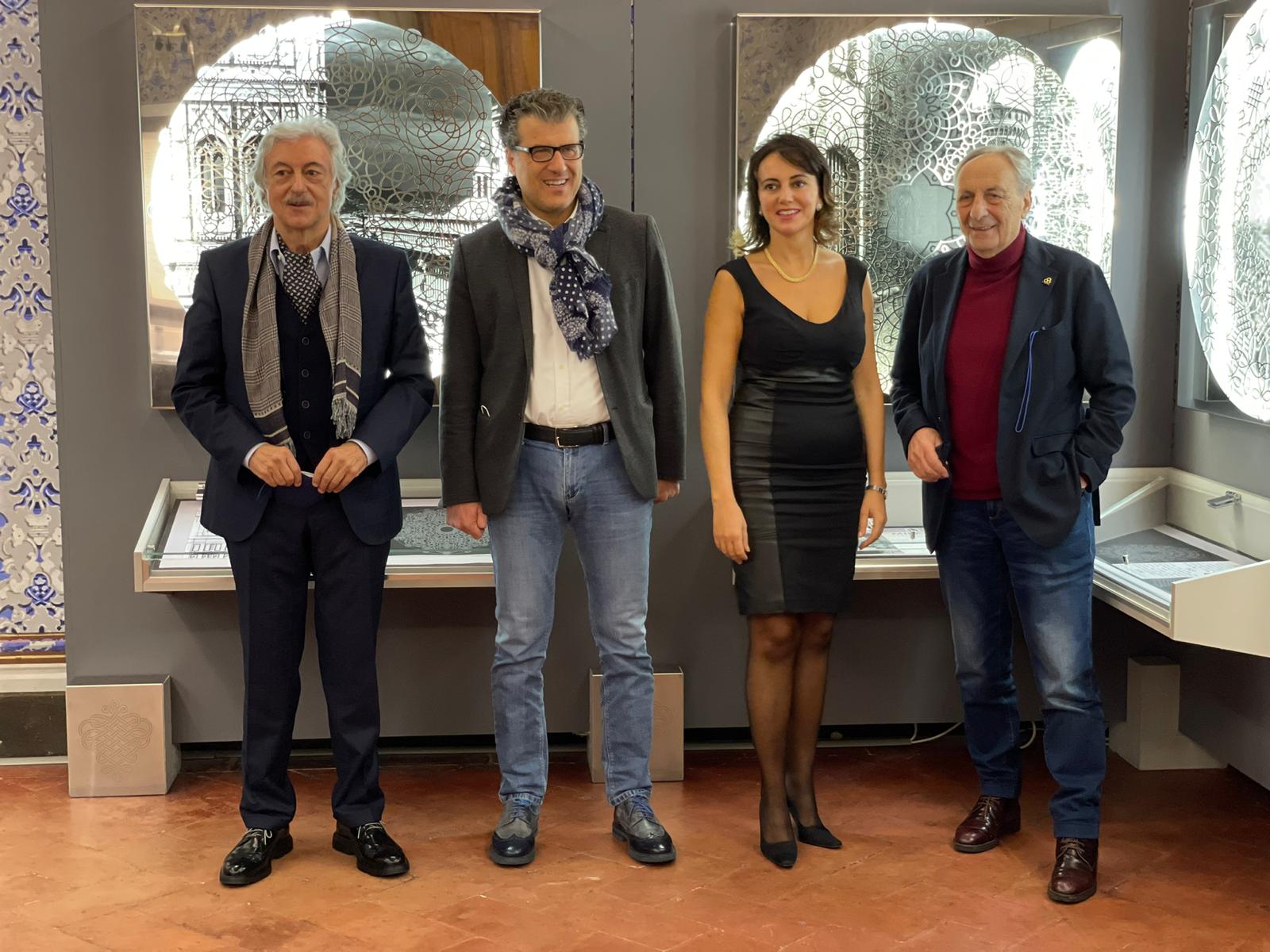 A conference to launch the catalogue for the ‘CITTA’ E NODI DI LEONARDO DA VINCI- Aurelio Amendola and Oreste Ruggiero’ exhibition was held in the ‘Sala del Camino’ at the Leo Leo Vigni Exhibition Centre on 27 November.

The exhibition is supported by the region of Tuscany and the municipalities of Florence, Pistoia, Pisa and Vinci.

The event, promoted by the LEO-LEV Centre itself in collaboration with the Tuscany region, is of particular importance,” explains Oreste Ruggiero, President for Artistic Activities, “because: “The exhibition was conceived and prepared during the pandemic as a response to a dramatic world event also through art; it unites the expressiveness of the two artists through their particularities (photography, through which Amendola interprets works from Michelangelo to Warhol, and high relief art, characteristic of my sculptural works Skyline and Steel); interprets cities associated with Leonardo not only as physical places, but imagining the perception of emotions of the maestro through the transparency of his famous knots made of steel

The exhibition, together with Oreste Ruggiero, is curated by Veronica Ferretti, art historian and journalist, and she states that in the works for the exhibition “Leonardo da Vinci’s Cities and Knots: “Aurelio Amendola captures with his photographic lens the poetics of this ‘great observer of nature’, making us perceive the atmospheric effects of variability that the passage of a cloud creates on a landscape or architecture; Oreste Ruggiero reproduced six of Leonardo’s famous knots, preserved in the Ambrosian Library, on steel and mounted them with an incident light frame on Aurelio Amendola’s photograph, achieving a grid effect similar to an eastern mashrabia. The end result is a four-handed work; two surfaces that do not oppose each other but interpenetrate into each other, creating a subtle effect and convincing us that reality seen through a filter, as Leonardo said, is never defined and ultimately never fully cognisable.

Eugenio Giani, who will be the speaker, writes in the catalogue: “Oreste Ruggiero recently summoned Aurelio Amendola to Vinci and Veronica Ferretti, a lecturer and art historian who has worked for over a decade at the Vivarelli Foundation and Casa Buonarroti in Florence. The result of this collaboration is the exhibition “Aurelio Amendola Oreste Ruggiero Città & Nodi di Leonardo da Vinci” and two unpublished interviews led by Veronica Ferretti, which allow us to know the authors better: Amendola drew inspiration from the places where the universal genius lived (Vinci, Florence, Pistoia, Milan, Pisa and Amboise), while Ruggiero chose the theme of Leonardo’s knots. I hope that this beautiful initiative, which also plans to honour Leonardo’s greatest scholar, Professor Carlo Pedretti, with the support of Oreste Ruggiero and Aurelio Amendola on the one hand and scholars Sergei Androsov and Veronica Ferretti on the other, can reach the halls of the Hermitage at Piotrovsky, creating a perfect link with St Petersburg.

Sergei Androsov, director of the European Art Department at the Hermitage in St Petersburg, writes in the catalogue that compared to photographs of works of art by great artists: “Less well known are Aurelio Amendola’s views depicting cities and places where Leonardo da Vinci lived or which were significant in his life. The photographer thus becomes an explorer to find timeless visions that correspond to the Renaissance centuries. Aurelio Amendola and Oreste Ruggiero’s exhibition “Cities and Knots of Leonardo” presents some of Aurelio’s photographs on this subject, as a testimony of his creative personality and an artist who is always on the move and focused on creative research. The exhibition is also new in that Amendola combines his art as a photographer of depicted cities with that of Ruggero, who unites him through an interpretation of the transparency of his Accademia vinciana steel knots, a union that is sure to present unexpected emotions and fruits”.

At the start of the event, Professor Mikhail Piotrovsky, Director General of the State Hermitage in St Petersburg, sent a letter of welcome to Eugenio Giani, President of the Tuscany Region, who patronises the exhibition together with the municipalities of Florence, Pisa, Pistoia and Vinci, and the two artists who created these works in four hands. Piotrowski hoped that “the Leo-Lev Centre, as he has done with passion on other occasions, can become a link between the culture and art of the region of Tuscany and the culture and art of Russia in general and St Petersburg in particular”.