The Announcing Angel of the Parish Church of San Gennaro in Lucca Area. Its Restoration and the Replica. 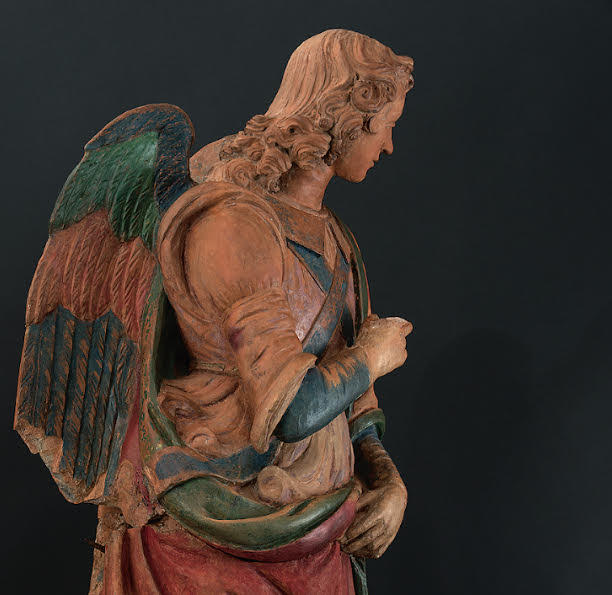 The Opificio delle Pietre Dure presented the restoration of an interesting and little-known terracotta Angel of the Parish Church of San Gennaro in Lucca area, stylistically ascribable to the great workshop of  Verrocchio and which was also attributed to Leonardo da Vinci by Carlo Pedretti.

Some documents remind us  that on 21 July 1776 the Angel was struck by a ladder while the church was being decorated for the feast of the co-patron San Cirillo. The upper part of the statue fell shattered. The documents that report the accident remind us that 30 pounds of chalk and the colors for “recolorillo” (to color again) were bought to repair the angel. The complex restoration was carried out by the  Plastic, Vitreous and Ceramic Materials sector in nine months of intense work. After removing the plaster used for the eighteenth-century repair, the old inadequate gluing was removed as well as the thick repainting layers, working on each individual fragment. In many areas it has been possible to find the original colors, much more precious than those used after the eighteenth century accident. For example, the dull yellow of the wing hid a beautiful azurite, under the red of the mantle re-emerged the rose madder pigment.

Numerous traces of pure gold leaf are evidence of the presence of refined decorations. After the repainting was removed, the fragments were glued together and the figure of the angel was reconstructed, showing a new chromatic appearance. After integrating the terracotta gaps, they proceeded with the pictorial retouching with chromatic selection to mend the islands of color and help the correct reading of the volumes.

The project was made possible thanks to the  LEO-LEV funding, an exhibition center in Vinci, which has also requested a faithful replica of the work. For the first time,  the Ceramic and Plastic Materials sector has therefore tried to create a terracotta copy by reproducing the same pictorial technique of the original that had been investigated with chemical tests. For this replica the Opificio was helped by  a ceramist and  a professor of the Academy of Fine Arts of  Florence, two men of great experience. The result is particularly striking but it gives us an idea of ​​how the original work must have appeared to the faithful of many centuries ago when, in the obscurity of the Church, the sculpture was only lit with candles or oil lamps.