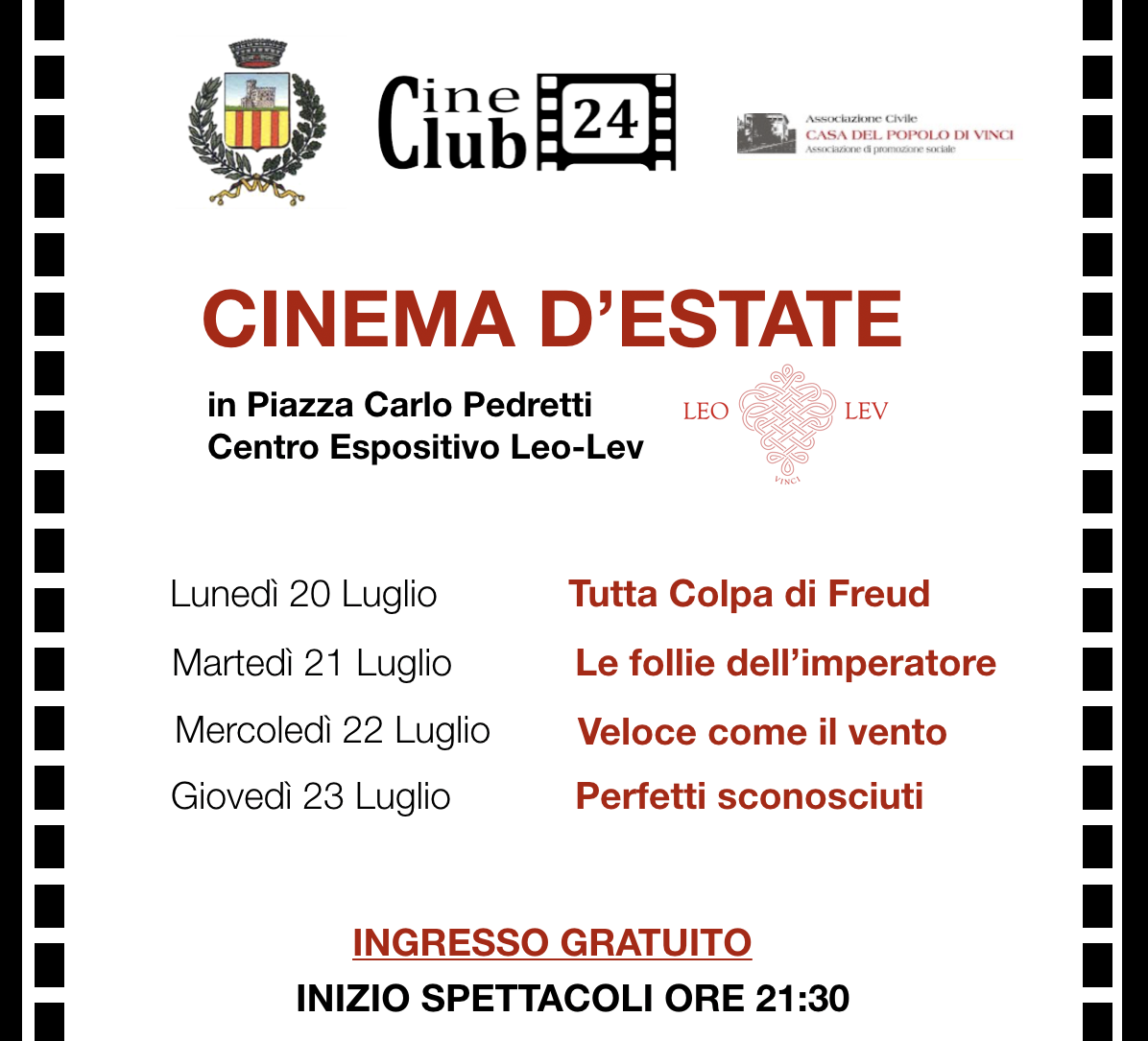 In the town of Vinci, summer 2020 offers a rich programme of events, including an appointment for film lovers. The Cinema d’Estate festival promoted by the Municipality of Vinci includes 15 evenings of open-air cinema, organised by Cineclub and Casa del Popolo di Vinci – represented by Luigi Palandri – in four different locations, with an interesting programme of screenings announced by the Municipality of Vinci. The programme follows:

After a meeting between the Deputy Mayor and Councillor for Culture, Sara Iallorenzi, and the President of the Artistic Activities of the Leo-Lev Exhibition Centre, Oreste Ruggiero, it was agreed to plan four evenings in the splendid setting of Piazza Pedretti.

Visitors will also have the opportunity to admire the square dedicated to Prof. Carlo Pedretti, one of the leading experts on the life and works of Leonardo da Vinci. Designed by the architect-artist Oreste Ruggiero, the space at the Leo-Lev Centre features works by the author himself: the decorative flooring inspired by Leonardo’s Sala delle Asse in the Sforza Castle in Milan, the scenographic fountain conceived together with Pedretti from a project by Leonardo and, finally, the skylines recalling the four cities of the Tuscan master (Vinci, Florence, Milan and Amboise).

The films programmed in the space in front of the Leo-Lev Centre are:

A 2014 comedy directed by Paolo Genovese. Rome, the psychologist Francesco is struggling with his daughters’ problems. Marta is in love with a deaf-mute, Sara is gay while 18-year-old Emma has lost her head for a 50-year-old married to Claudia, with whom Francesco knows very well and is in love.

Tuesday 21 July: THE FOLLIES OF THE EMPEROR

An animated film from 2000, directed by Mark Dindal. Emperor Kuzco is about to turn 18 but is too full of himself to find a “suitable” bride. However, he makes the mistake of sacking his elderly councillor Izma, who takes revenge with the help of the hunk Kronk. His plan is to poison the emperor but, by mistake, the potion turns him into a talking llama…

Thursday 23 July: FAST AS THE WIND

A 2015 drama film, directed by Matteo Rovere. Giulia de Martino is a young and promising race car driver. Helping her to tackle the GT Championship at only 17 years old is her brother Loris, a failed ex-driver and drug addict, but with a great talent for motor racing.

A 2016 film by Paolo Genovese. Each of us has three lives: a public one, a private one and a secret one. Once upon a time, the secret one was well protected in the archive of our memory, today in phone sims. What would happen if that tiny card started talking? A brilliant comedy about friendship, love and betrayal, which will lead four couples of friends to confront each other and discover that they are “Perfect strangers”.