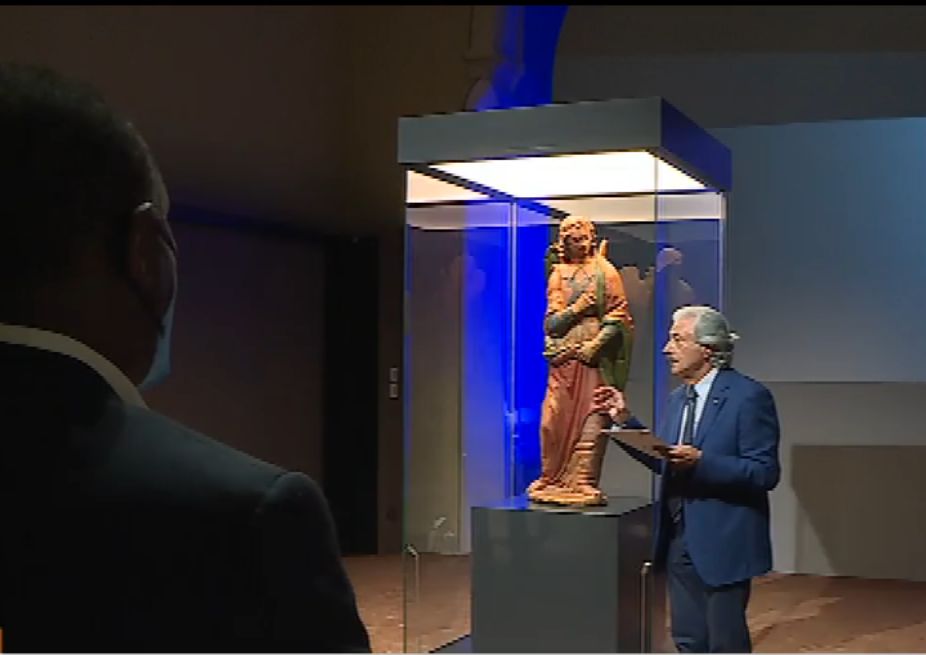 The Announcing Angel, a sculpture from the parish church of San Gennaro in Capannori (Lucca) which Professor Carlo Pedretti had attributed to the young Leonardo da Vinci, leaves the exhibition held at the Leo — Lev Exhibition Centre in Vinci after almost two years.

The restoration of this presumably early work by the greatest Renaissance artist was promoted and supported by the Leo-Lev Centre and carried out by the Opificio delle Pietre Dure in Florence. Before the restoration, the work was in a serious condition as it was accidentally struck by a ladder in 1773, shattering it into 28 pieces, and reassembled by a local craftsman.

The polychrome terracotta sculpture, 131 centimetres high, depicts the Archangel Gabriel and was already attributed in 1957 to the school of Verrocchio by the art historian Carlo Ludovico Ragghianti, only to be attributed in 1998 and 1999 by Pedretti as an early work by Leonardo.

The work will be exhibited from 18 September to 19 December in the church of San Franceschetto in Lucca, with an event promoted by the Fondazione Cassa di Risparmio di Lucca.

At the Leo-Lev Exhibition Centre it is still possible to admire the Replica of the Announcing Angel made by the Opificio delle Pietre Dure of Florence. A life-size copy of the Archangel Gabriel, made using the modelling and clay firing methods of the time, with the same pigmentations as the Original dated between the end of the 15th and the beginning of the 16th century.

At the Leo-Lev Centre there is also another rarity — the Madonna del Parto della Pieve di San Gennaro (an anonymous artist), a particularly mysterious terracotta sculpture, being the only one of its kind in the world, with a natural size of about 1.68 cm (much larger than the typical representation of a woman in the 1400s) and for its vivid reference to the themes and modes of the famous Madonna del Parto di Monterchi by Piero della Francesca.

In addition to illustrating the restoration work, the exhibition aims to show how the Annunciating Angel and Our Lady of Childbirth are now inseparable from each other, as archive documentation from 1646 describes the sculptures placed opposite each other as a sculptural group of the Annunciation. This was until more recent times when Antonio Mazzarosa, in 1933, in ‘La Terra di San Gennaro la sua Pieve e il suo Pievato, Note artistiche storiche, Memoria’ wrote: ‘Two life-size terracotta statues without glazing, one reduced to two pieces, but recomposable (the angel), the other mutilated of the hands (the Virgin) […] placed opposite each other represented the Annunciation of the Virgin’.

In a single room, the Leo-Lev Exhibition Centre presents visitors with the symbolic value of the Angel and the Madonna reunited in «Una Singolare Annunciazione», a sculptural group that the Archdiocese of Lucca, the Parish of San Gennaro and the Superintendence of Lucca and Massa Carrara will want to place together again, in dialogue with each other, when the works return to the Parish of San Gennaro.

Leonardo and Piero della Francesca», the catalogue by Oreste Ruggiero with the chapter dedicated to the restoration by Filippo Tattini and Iolanda Laterza is available at the Leo-Lev Centre bookshop.