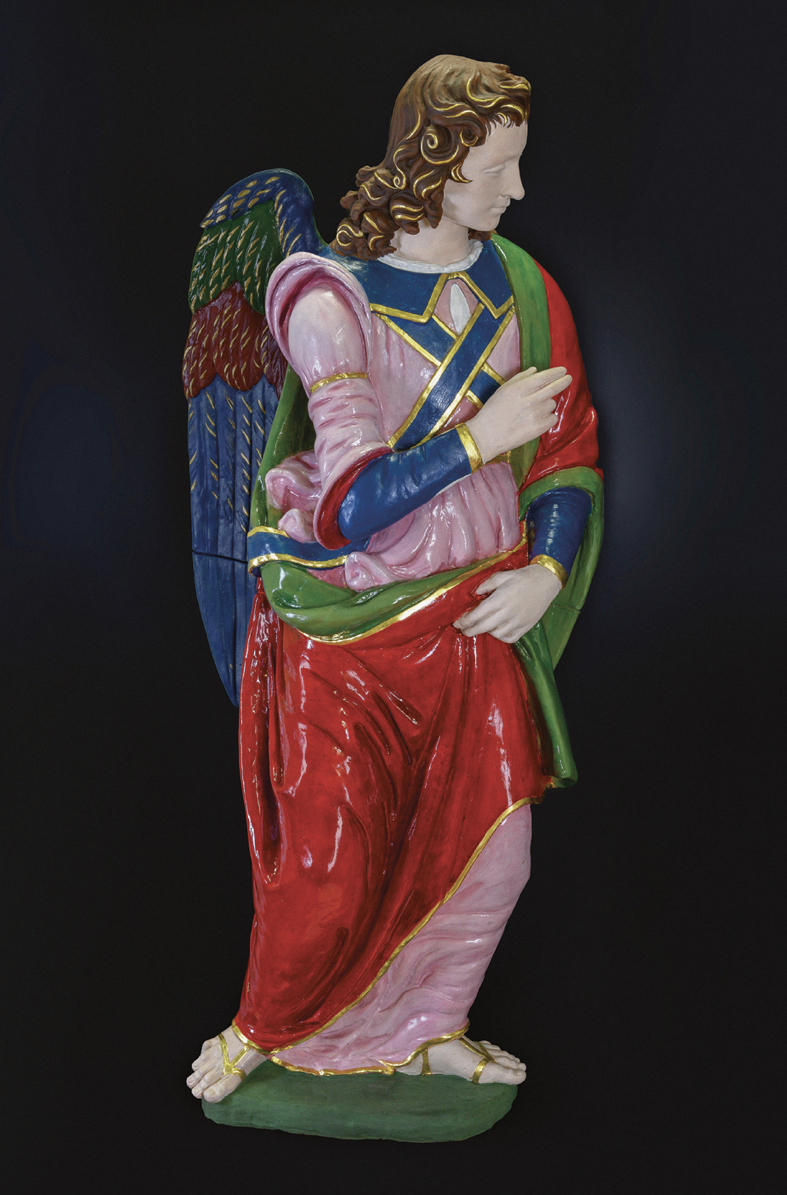 The Replica of the Announcing Angel from the Parish Church of San Gennaro in Lucca – made by the Opificio delle Pietre Dure of Florence – has temporarily left the Leo-Lev Exhibition Centre in the direction of Forte dei Marmi for the exhibition “RE-NAISSANCE. A dialogue between Renaissance painting, contemporary art and sacred icons”.

The exhibition at Fortino Leopoldo I in Forte dei Marmi (Lucca), promoted by the City’s Culture Department and the Villa Bertelli Foundation, curated and produced by Armando Fusco and Bianca Russo for Aubry Productions, in collaboration with the Leo-Lev Exhibition Centre in Vinci, the DurerArts Gallery in Florence, the A.L.E.R.A.MO – Museo Civico di Moncalvo association and the Pontificie Fonderie Marinelli in Agnone.

The title ‘Re-naissance’ is symbolic, describing the dramatic moment being experienced due to the health emergency. What could be more powerful than thinking of a new Humanism? Art and creativity can come to our rescue and help us hope for a rebirth… once again they light up a glimmer of hope! Just as artists such as Giotto, Masaccio and others did after the Black Death in the 14th century, configuring a new horizon in which we could glimpse that international Gothic style which countered the fear of death with a love of life.

So today, this exhibition, a dialogue between 16th-century paintings, contemporary art and sacred icons, helps us hope for a rebirth that is not only symbolic, but objective. Here and now.

The exhibition set up in Forte dei Marmi is dedicated to two great moments of Christianity: Easter and Christmas, or rather the sense of Easter that requires Christmas to be complete. A sense that is well underlined allegorically by the works presented in the halls of Fortino Leopoldo I, until 20 June 2021.

Visitors will be “guided” through the exhibition by the Angel of the Leo-Lev Exhibition Centre. The replica of the sculpture of the Announcing Angel of San Gennaro is a life-size copy of the Archangel Gabriel, attributed to Leonardo da Vinci by Carlo Pedretti. In fact, the sculpture has been made using clay modelling and firing methods, reproducing the same pigmentations as the Original, which was presumably made at the end of the 15th or beginning of the 16th century.

The Replica of the Angel in Forte dei Marmi is in dialogue with the works Angeli & Nodi by Oreste Ruggiero. The artist has artistically reinterpreted Vinci’s knots, creating a grid where portraits and effigies can enter in osmosis. It is a unique feature of his art that “veils” the faces depicted in a sort of interweaving that evokes vegetable branching and at the same time the immaterial dimension of infinite space. Thus those knots also enter into symbiosis with the feelings, or motions of the soul as Leonardo defined them, of the person portrayed.

With this art, Ruggiero paid homage to Leonardo and the splendid face of the Angel of San Gennaro before its restoration; when, however, events and time had not affected its beauty.

Finally, the “Re-naissance” event will also be “punctuated” by the bells of the historic Pontificia Fonderia Marinelli: instruments that have always spoken a universal language to narrate both beautiful and tragic.

A production by Armando Fusco and Bianca Russo